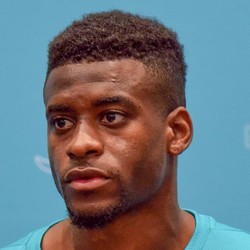 Parker's an extremely talented wide receiver that has developed chemistry with Ryan Fitzpatrick. As long as Parker's 2019 season wasn't a fluke, which I don't believe it was, he'll be in the borderline WR1 conversation all season long.

Down slightly. I have a feeling the Dolphins will move to Tua sooner than later (if healthy), so there's an unknown there that has me dropping Parker.

Are we just going to ignore the fast that Parker was immediately out targeted 60-52 to a UDFA. Or is an offense with no other weapons, and scoring 9 TDs the more likely answer for his success? His breakout was because of huge increase in success rate versus man and press, but he was still a bottom half percentile player at both, he just had Fitzpatrick not caring about throwing into tight windows. Not a problem if Fitz plays out the whole season. A long term concern for me though.

Compared to 2019 finish (No. 7 WR in FAN PTS), going at a major discount in early ADP - sorry, I'm not nearly as threatened by Preston Williams as the consensus

Brandon Funston - The Athletic3 weeks ago

There were two wide receivers who hit at least 55 yards in 13 games last season. Michael Thomas and Parker. He didn't rely on touchdowns to score fantasy points. Knowing that Ryan Fitzpatrick will be back, and that Tua Tagovailoa may take over at some point, Parker should remain in the WR2 conversation most weeks. He did finish as the No. 7 wide receiver last year, but the team now has an improved defense and run-game, which will remove some volume from the passing offense.

Parker finally had the breakout season we thought he would have when he was drafted, tallying 1202 yards from scrimmage and 9 touchdowns. He is a bit risky having done that on a really bad team in his Age 26 season, but I think he can maintain WR2 value if he can stay healthy in 2020.

27yo - I have a contrarian viewpoint on Parker as most have him mid to late 30s, but I think what we saw last year was finally getting over the hump that has hampered his career. If you trade FOR him, you need to be thinking mid 30s, but if you're trading him away, I'd want a player more comparable to this ranking.

Finally emerged as a productive fantasy player. Can be a low-end fantasy WR1 with Fitzpatrick slinging it or Tua dropping him on-target throws.

Lukas Kacer - The Fantasy Stock Exchange13 weeks ago
Who Should I Draft?
Most Accurate Experts
for DeVante Parker
Do Not Sell
Are you looking to contact Customer Support about a subscription or account related question?
Yes
No, I'm a California resident looking for the California Consumer Privacy Act form