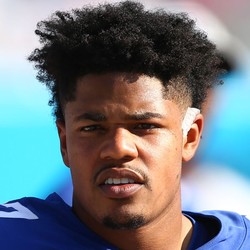 In a season where he was dealing with injuries and a rookie quarterback, Shepard still posted WR2 or better numbers in 40 percent of his games, which ranked 33rd among wide receivers. Now, to be fair, the offense has changed, but it doesn't appear the new regime is very fond of Evan Engram, as evidenced by putting him on the trade block during the NFL Draft. Golden Tate is aging, and while Darius Slayton did flash at times, it was a relatively small sample size. It shouldn't shock anyone to see Shepard get 100-plus targets in 2020 and finish as a WR3, though you do have to wonder what his upside actually is with so many mouths to feed.

4 years in and we have a yards per reception of 11.6. That average is a lot of work just to go over 1000 yards. Combine that with his lack of TDs, and worrisome concussion history, and you get a perfectly boring WR that needs 90+ receptions to be fantasy relevant.

Deposit $10 at a DFS partner site you have NOT played at and get a FREE 6 Month HOF Subscription!
Claim Offer
Who Should I Draft?
Most Accurate Experts
for Sterling Shepard
Consensus Rankings
View All Rankings
Do Not Sell
Are you looking to contact Customer Support about a subscription or account related question?
Yes
No, I'm a California resident looking for the California Consumer Privacy Act form