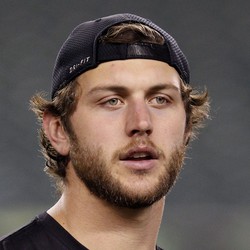 When looking for tight ends for fantasy football, you're either betting on pure target volume or touchdown upside. There are very few tight ends in the NFL that see enough targets to be fantasy relevant on that alone, so that leaves a lot where you're simply banking on TD production. This season, Eifert's as solid of a bet as any tight end to reel in 5 to 7 touchdowns. He's a huge presence in the red zone and he proved that he can stay healthy last season. Eifert's a solid flyer within the top-20 tight ends. The fact that he's going as TE41 currently is ridiculous.

We've seen tight ends have success in Jay Gruden's offense and Eifert does have one year of experience in his offense, dating all the way back to 2013. He's on his third straight one-year deal, as no team wants to commit to him. The Jaguars will be racking up the pass attempts, but last year's draft pick Josh Oliver is also likely to be involved in the offense. It's possible Eifert has streamable weeks, but he's not in the every-week consideration.

Lukas Kacer - The Fantasy Stock Exchange13 weeks ago
Who Should I Draft?
Most Accurate Experts
for Tyler Eifert
Do Not Sell
Are you looking to contact Customer Support about a subscription or account related question?
Yes
No, I'm a California resident looking for the California Consumer Privacy Act form