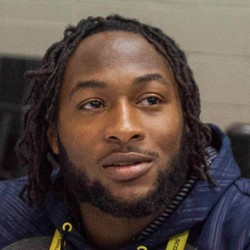 Despite having Aaron Rodgers under center, the Packers decided to add a third-string running back and fullback to their roster on Day 2 of the NFL Draft. Is that worrisome to Jones' production? Maybe a bit, as Matt LaFleur seems to want to continue his timeshare ways. Jones is by far the most talented, so even if we were to see him dip down to 13-15 touches per game, that's enough for him to do damage, especially considering Rodgers targets him in the passing game. Jones is one of just two running backs (Alvin Kamara is the other) who've finished with a top-30 season over the last 10 years with less than 300 touches. Jones is one of the most efficient running backs in football, though the coaching staff keeps him in RB2 territory.

Aaron Jones ‘would love to be a lifelong Packer’

Packers RB Aaron Jones told reporters today that he “would love to be a lifelong Packer,” but admitted that he doesn’t know if that can become a reality.

Jones is set to become a free agent after the 2020 season when his rookie deal expires. He’ll make just over $2M this year coming off a spectacular 2019 season in which he rushed for 1,084 yards and 16 TDs. The Packers took RB A.J. Dillon in the second-round of the Draft in case they can’t extend Jones long term. Jones’ agent Chris Cabott also told reporters that “there have been conversations and there will continue to be [regarding a contract extension].” Even with Dillon and Jamaal Williams in Green Bay, expect Jones to be a solid RB2, but expect regression from the 16 rushing touchdowns from a season ago.

Deposit $10 at a DFS partner site you have NOT played at and get a FREE 6 Month HOF Subscription!
Claim Offer
Who Should I Draft?
Most Accurate Experts
for Aaron Jones
Consensus Rankings
View All Rankings
Do Not Sell
Are you looking to contact Customer Support about a subscription or account related question?
Yes
No, I'm a California resident looking for the California Consumer Privacy Act form