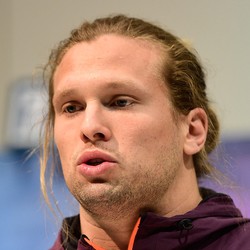 Winovich is someone who won me over while watching his game film, as he has a non-stop motor, and always has his eyes on the play in front of him. He doesn't have the most strength, which will force some to view him as a better OLB in a 3-4 defense, but his speed helps make up for his lack of strength. He's seemingly always involved in the play, which is something not many edge defenders can say. He stood out during the agility drills at the Combine, finishing with the best 20-yard shuttle among edge defenders.