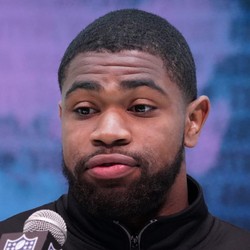 He's so slippery, has a low center of gravity, keeps his pad level low, and rarely takes a big hit. He creates yards. While running backs may not matter to some, he does. Easy to lose him in traffic. Used a lot in the passing game. There's some inconsistency in his game-speed, almost like he was worn down at times. Has short area burst, though his long speed may not be great. Will sometimes bring his momentum to a halt to jump cut a defender, and that may turn off some coaches, as they want RBs to stay downhill. Doesn't just run screen routes, but does wheel routes, go routes, etc. Protects the ball well, high and tight, especially when he's headed into traffic. Pass-protection may be the one area he needs some work. Still, he's a good one.

At his size (5'7/207), the 40-yard dash time doesn't look great in a vacuum. However, we need to note the type of player that CEH is and how he succeeds as a RB. He wins with burst, great contact balance, and fantastic change of direction. This was a drill that CEH wasn't expected to run extremely well in, but as long as he could run faster than a 4.66 or so, his stock was going to remain the same. For him to run slightly faster is an added bonus...CEH also showed off his lower body explosiveness by jumping 39.5 inches in the vertical jump, which is a great number. For the time being, Edwards-Helaire belongs in the first round Dynasty rookie draft conversation and should fall into a very favorable situation for fantasy football right out of the gates.