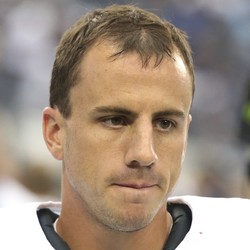 Dan Bailey re-signing with the Vikings

K Dan Bailey will re-sign with the Minnesota Vikings on a three-year deal.

Bailey had an impressive 2019 campaign with Minnesota after a 2018 season where he only connected on 75% of his field goal attempts. He went 27-29 on field goal attempts and 40-44 on XPs last year for the Vikings. Bailey seems to have found a new home in Minnesota for at least the next three years after playing in Dallas for the first seven years of his career.

Deposit $10 at a DFS partner site you have NOT played at and get a FREE 6 Month HOF Subscription!
Claim Offer
Who Should I Draft?
Most Accurate Experts
for Dan Bailey
Consensus Rankings
View All Rankings
Do Not Sell
Are you looking to contact Customer Support about a subscription or account related question?
Yes
No, I'm a California resident looking for the California Consumer Privacy Act form