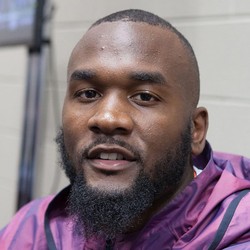 Over the last three weeks the Jaguars' offense has been among the stingiest in allowing production to opposing linebackers. In that time, they have allowed just 55 total tackles and no big plays to the position. That being sais, since returning from missing time due to a concussion, Leonard has returned to IDP stud form. In the past four games he has put up 44 total tackles and a pair of interceptions. He also returned one of the interceptions for a touchdown. Despite missing three games he is currently a top-5 linebacker in balanced scoring formats.

Darius Leonard gets his fifth INT of the year

Darius Leonard registered three solo tackles, three assisted tackles, one TFL, one pass defended, and one INT in a disappointing, 38-20 loss to Jaguars.

Despite missing three games earlier this season, Leonard was still a dominant force in the middle for this middling Colts team. It would have been hard for him to exceed the unreal year he had as a rookie, but he did at least solidify his undeniable talent and production. Leonard will rightfully be one of the most coveted IDPs next season and is firmly in the conversation as the highest-ranked defensive player.

Deposit $10 at a DFS partner site you have NOT played at and get a FREE 6 Month HOF Subscription!
Claim Offer
Who Should I Start?
Most Accurate Experts
for Darius Leonard
Consensus Rankings
View All Rankings