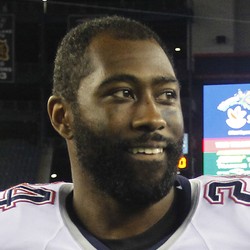 Darrelle Revis announced his retirement from the NFL today on Instagram.

Revis was cut by the Chiefs this offseason, and he's decided to end his 11-year career. In his prime, he was one of the best cover corners of all-time. As such, wide receivers who entered Revis Island were largely avoided by their quarterbacks. While most known for his time with the Jets, Revis also played for the Buccaneers, Patriots, and Chiefs, winning a Super Bowl with New England.