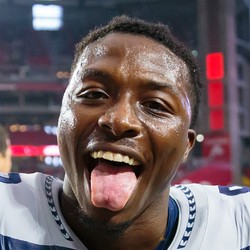 Moore's shown chemistry with Russell Wilson in the past, but he's never been able to capitalize on it and turn it into a solidified starting role. Moore will be nothing more than a dart throw in some DFS lineups this season.

David Moore officially signed his RFA tender with the Seahawks on Sunday. The deal is worth $2.1 million.

The Seahawks placed an original-round tender on Moore in March, and he will remain in Seattle for the upcoming 2020 season. He recorded 17 catches for 301 yards and two touchdowns across 14 games for the Seahawks in 2019. Moore is the third receiving option behind Tyler Lockett and DK Metcalf, making the 25-year-old a flyer in deep-league formats.

(2020)
View Full Schedule
Who Should I Draft?
Most Accurate Experts
for David Moore
Do Not Sell
Are you looking to contact Customer Support about a subscription or account related question?
Yes
No, I'm a California resident looking for the California Consumer Privacy Act form