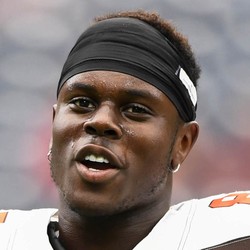 David Njoku not expected to be traded by the Browns

David Njoku is reportedly not expected to be traded, despite the Browns signing of tight end Austin Hooper this offseason.

The Browns recently signed Austin Hooper as the highest paid tight end in football. With this transaction, it appeared the Browns were ready to move on from Njoku. The team has not announced any plans of dealing the 23-year-old and could feature him in two-tight end sets. Njoku spent most of 2019 on the injured reserve, but did manage five catches for 41 yards and touchdown across four games. Unless he is dealt, Njoku is a borderline TE3 in his current situation with the Browns.

Deposit $10 at a DFS partner site you have NOT played at and get a FREE 6 Month HOF Subscription!
Claim Offer
Who Should I Start?
Most Accurate Experts
for David Njoku
Consensus Rankings
View All Rankings