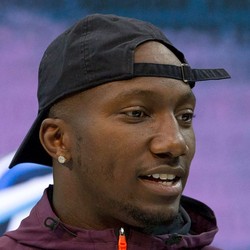 It was odd to see Samuel finish as a top-30 wide receiver last year, because it didn't feel that way throughout the year. He saw just 81 targets and had just two games with more than eight targets. The 49ers offense is going to be run-heavy, but Samuel will be the go-to guy when they do drop back to pass. He's also included in the run-game, as evidenced by his 159 rushing yards and three touchdowns last year. It's tough to see him having a true breakout season, but finishing in WR2 territory is within the realm of possibilities.

Deebo Samuel caught five passes for 39 yards and rushed three times for 53 yards in the 49ers' Super Bowl loss to the Chiefs.

Samuel was very involved in the Niners' biggest game of the year, once again being fed a healthy amount of end-around rushes. As a receiver, Samuel caught 57 passes for 802 yards and three touchdowns during the regular season. There's certainly room for growth and we expect the 36th overall pick from last year's draft to receive plenty of hype this summer.