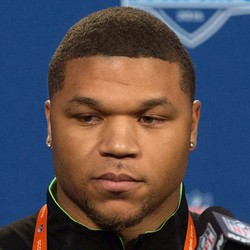 A former 2016 fourth-round selection out of Utah, Booker has played four seasons in the NFL with the Denver Broncos. His best season came his rookie year, when he rushed for 612 yards and four TDs on 174 carries, with an additional 265 yards and two TDs on 31 catches. For his career, Booker owns a 3.8 average with just over 1,100 yards on the ground. He’ll look to settle in and carve out a role in the Oakland offense behind second-year man Josh Jacobs.