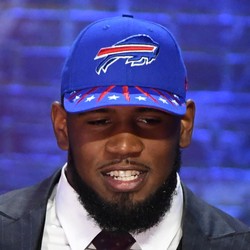 Despite him weighing under 300 pounds (287 pounds at Combine), Oliver brought a whole lot of power to his game. There is a mean-streak to his game that you love with someone who plays in the trenches. There are times he can bury his head too much and lose track of the play, but he's not someone you'd particularly like to go against as an interior offensive lineman. He won't see as many double/triple teams in the NFL as he did while at Houston.

Ed Oliver tallied three solo tackles, one assisted tackle, one TFL, two sacks, one QB hit, one pass defended, and a forced fumble, as the Bills beat the Cowboys, 26-15 on Thanksgiving.

Oliver had his signature game as a rookie and helped the Buffalo defense limit a potent Dallas offense to just 15 points. He recorded a season-best with his two sacks, and now has a sack in three straight games. With the first-round pick finally starting to deliver on his draft capital, he might be an under-the-radar pick up for the fantasy playoffs. He and Bills will have another difficult task in stopping the Lamar Jackson-led Ravens next Sunday.