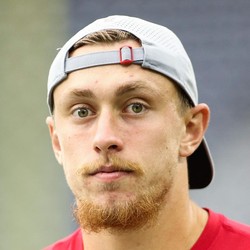 Kittle remains the top option on this Niners offense. In a game they need to win in order to lock up the top seed, look for them to target Kittle early and on third downs. He also needs just 33 yards to hit 1,000 on the season.

Kittle had a quiet post-season, totaling just eight catches across three games. During the regular season he played in 14 contests, hauling in 85 receptions for 1,053 yards and five touchdowns. The 26-year-old has reportedly dealt with a torn labrum in his shoulder for two years now so it would make sense if he gets that taken care of this off-season. Additionally, expect to hear news of the 49ers trying to extend their star tight end. His contract is up after 2020.

Deposit $10 at a DFS partner site you have NOT played at and get a FREE 6 Month HOF Subscription!
Claim Offer
Who Should I Start?
Most Accurate Experts
for George Kittle
Consensus Rankings
View All Rankings