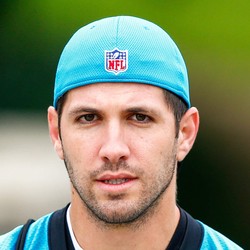 Graham Gano’s rehab going well, will be in a competition with Joey Slye

Panthers kicker Graham Gano is doing “really, really well” in rehab from a leg injury he suffered in 2018 according to Special Teams coordinator Chase Blackburn.

Gano missed the entirety of the 2019 season and was replaced by rookie kicker Joey Slye from Virginia Tech. Slye filled in for the 10-year veteran, going 25-32 on field goals and 31-35 on XPs Not great, but not terrible, yet enough for Blackburn to refer to the 2020 season as a kicking competition for both players. He stated, “We’ve got two very capable kickers with relaly talented legs.” Gano is a career 82.1% on field goal attempts and might bring more accuracy to the table, but Slye might have the power advantage over the 33-year old.

(2020)
View Full Schedule
Who Should I Draft?
Most Accurate Experts
for Graham Gano
Do Not Sell
Are you looking to contact Customer Support about a subscription or account related question?
Yes
No, I'm a California resident looking for the California Consumer Privacy Act form