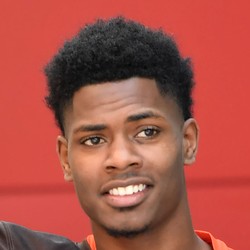 The top cornerback on most boards, as Williams is a tall cornerback who excels in man-coverage. He doesn't have the zone recognition that Byron Murphy does and a lot of it comes down to Williams looking at his receiver rather than the quarterback. It's not a massive problem, but it's something he can work on a bit because it allows receivers to undercut him on an underthrown ball. Outside that, he's typically glued to his receiver and gets his long arms up which makes it difficult for them to haul it in, a trait that's obviously coveted. He showed up to the Combine and ran a 4.38-second 40-yard dash, solidifying him as a top-15 pick in the draft.

Greedy Williams (hamstring) is listed as inactive for the Week 6 games against the Seahawks.

Russell Wilson should be in-line for a great game will Williams and fellow CB Denzel Ward sitting out on Sunday. The Browns will be looking at Terrance Mitchell and TJ Carrie to step up for the team in their place.