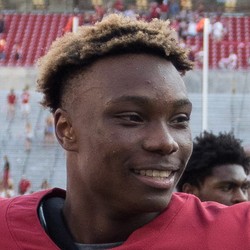 Henry Ruggs going first off the board was a bit of a shocker to the Las Vegas Raiders, but he fits this offense perfectly and will step in and assume the Tyrell Williams role. This offense now has a bit more competition for targets than it did last year, but Ruggs is still going to have an impact for fantasy football. He won't be a steady week in and week out contributor, most likely, but he's someone you can plug into your lineup every week to bring tremendous upside. His pre-draft ranking in my system of WR2 has him still up here towards the top of the board.

Per source, Raiders WR Henry Ruggs III will be ready for training camp after suffering a minor injury that required him to get stitches last month.

Ruggs III was reportedly helping a friend move when his leg got caught between the car and the trailer. He had to get stitches in his thigh, but suffered no muscular damage and will be ready to roll come training camp. Ruggs III is an intriguing prospect for the Raiders. He joins a wide receiver group that consists of Tyrell Williams, Bryan Edwards, and Hunter Renfrow. Las Vegas used their 12th overall selection to take Ruggs III, so they’ll do what they can to get him touches early on, but he makes for a much better target in dynasty leagues than he does in redraft leagues.