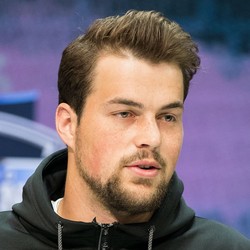 Jacob Eason lands as the third-string (for now) QB in Indianapolis. It's likely that Rivers plays at least two years here in Indy, so the likelihood that Eason sees the field anytime soon is slim. He should go undrafted even in SF leagues and could be something worth looking at on the waiver wire eventually.

Jacob Eason, pick No. 122, officially signs with the Colts

Former Washington QB Jacob Eason, pick No. 122 of the NFL 2020 Draft has signed his four-year rookie contract with the Colts.

Eason was sixth QB selected off the board in the 2020 NFL draft and will compete with Jacoby Brissett to backup starter Phillip Rivers. The fourth-round QB tossed for 3,000 yards and 23 touchdowns for the Huskies last season. Eason will learn under Rivers and could compete for the Colts’ starting QB job in 2021.