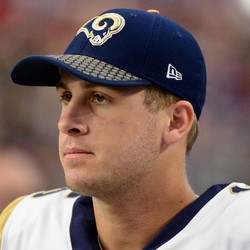 Goff finished the 2019 season with five consecutive multi-score games. He threw for 4,638 yards and completed 62% of his passes. Overall it was a major step back as the Rams failed to reach the post-season. However, he was still mostly useful in fantasy and that'll likely be the case again in 2020.

Deposit $10 at a DFS partner site you have NOT played at and get a FREE 6 Month HOF Subscription!
Claim Offer
Most Accurate Experts
for Jared Goff
Consensus Rankings
View all Flex Rankings