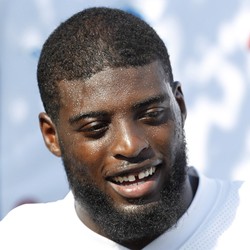 Jarrad Davis not getting fifth-year option from Lions

The Lions are not expected to extend a fifth-year tender to linebacker Jarrad Davis, which will make him a free agent after the 2020 season.

2017's 21st overall pick and Lions team captain will hit free agency prior to the 2021 season. Davis has started in all 41 games since being drafted out of Florida but had his 2019 season cut short after an ankle injury landed him on IR. He's been a bit up and down throughout his first three seasons, sometimes looking out of his element and other times looking like the Lions' best player. Davis's upside and potential will certainly make him a hot target after this season.

Deposit $10 at a DFS partner site you have NOT played at and get a FREE 6 Month HOF Subscription!
Claim Offer
Who Should I Draft?
Most Accurate Experts
for Jarrad Davis
Consensus Rankings
View All Rankings
Do Not Sell
Are you looking to contact Customer Support about a subscription or account related question?
Yes
No, I'm a California resident looking for the California Consumer Privacy Act form