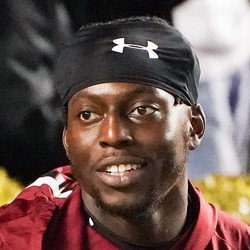 He has a good initial blow, quick off the line of scrimmage, but he doesn't push offensive lineman back much. Another guy who doesn't look as big as listed. He's not going to be a plugger, but more of a pass-rusher. Needs to win with speed, which is something not many interior defensive lineman do. He can be manipulated a bit too easily due to his long stature. Looked A LOT better against Missouri than Clemson. He couldn't do anything against the Clemson O-line. Can play DE in a 3-4 but not thick enough for a nose tackle. He's probably going to test extremely well at the Combine.