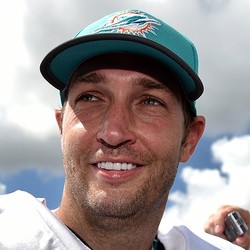 Jay Cutler started on Sunday against the Buffalo Bills, but only played for a series of three plays completing 1 of 2 passes for six yards for a 56.2 passer rating. David Fales played the rest of the game.

This was probably Cuter's last game for the Dolphins. He said earlier in the week he'd only come back and play only as a starter. That's something that's not likely to happen.