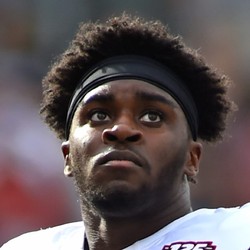 Small-framed cornerback who isn't going to help tackle anyone. Seriously, he just hangs on for dear life. He's a quick-twitched athlete who makes a good break on the ball on intermediate routes, but the longer he's left in coverage, the harder time he has. He keeps his eye on the receiver a bit too much while downfield and doesn't always know where the ball is, which allows receivers to catch a pass even if he's tight in coverage. He did show the ability to run with receivers down the sideline and not fall behind, though he doesn't appear to be fast. Moves all over the field, including the slot. Almost never see him in press coverage. In the end, I don't know of anything he does above average, but there are things that he doesn't do well.