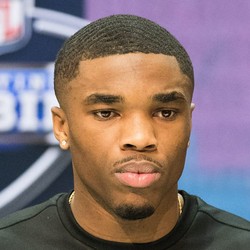 One of the first plays I watched from him, he was in man coverage and the ball was thrown 15 yards over his head, yet he ran and played the ball like he was in coverage on the play. Very aware of where the ball is. He doesn't appear to be extremely fast, but it's rare to see a receiver get separation over the top. Doesn't overreact to arm movements or stutter steps. Seems like a solid cornerback, but I don't believe he's a SHUTDOWN cornerback right now. Will let momentum carry him upfield at times, allow curl routes to be completely relatively easy. He is a better tackler than most cornerbacks. Very long arms, should help to cover bigger receivers.