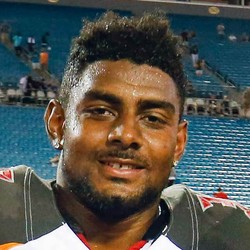 Jeremy McNichols does not make the Titans roster

Jeremy McNichols was released by the Titans on Saturday, Ian Rapoport of NFL Network reports.

A fifth-round pick by the Buccaneers in the 2017 draft, McNichols has yet to be able to find a role with a team having cups of coffee with the 49ers and Colts before getting picked up by the Titans this offseason. McNichols will look to catch on with another team but may end up on someone's practice squad.