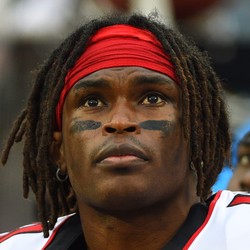 You'd have to go all the way back to 2013 to find the last time Julio Jones didnt finish as a top-8 wide receiver in fantasy football, and the only reason he didn't was due to injury (he was the No. 3 wide receiver in points per game that year). Keep in mind he's done all that without scoring a lot of touchdowns. Sure, the Falcons have Calvin Ridley making his way into a bigger role, but you simply cannot find a safer option to finish inside the top-10 every single year.

Jones didn't have his best season, but he was still one of the most productive fantasy wideouts in PPR. Although his 1,394 were his fewest since 2015, his 99 receptions were the fourth most of his career while his six touchdowns are the third most, a feat he's accomplished three different times. Jones will be a lock top 20 overall pick in 2020.

Deposit $10 at a DFS partner site you have NOT played at and get a FREE 6 Month HOF Subscription!
Claim Offer
Who Should I Draft?
Most Accurate Experts
for Julio Jones
Consensus Rankings
View All Rankings
Do Not Sell
Are you looking to contact Customer Support about a subscription or account related question?
Yes
No, I'm a California resident looking for the California Consumer Privacy Act form