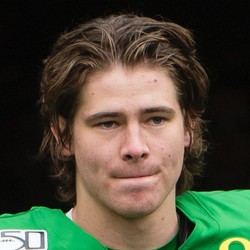 Justin Herbert may not see the field much in the first few weeks of the 2020 season, but he's going to take over that job from Tyrod Taylor at some point. Herbert's tape is inconsistent, but he now has the draft capital to assure us that he's the long-term answer in Los Angeles. If you're willing to wait, and gamble on his upside, Herbert's a fine selection for a QB-needy Dynasty roster.

The Los Angeles Chargers have selected quarterback Justin Herbert with the No. 6 overall pick in the 2020 NFL Draft.

After letting Philip Rivers leave in free agency, the Chargers praised quarterback Tyrod Taylor and expressed their confidence in him as a starter. Not many people bought that, and the general consensus was that they would take a quarterback in the draft and might even trade up in the first round to get one. Instead, they stay at No. 6 grab Herbert after Joe Burrow went at No. 1 to the Bengals and Tua Tagovailoa went at No. 5 to the Dolphins. Herbert will be given a chance to earn the starting job in training camp but will have to prove he is ready in order to overtake Taylor in his first year.