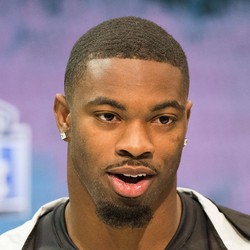 Overall, great speed rusher who has the necessary bend and shiftiness to succeed in the NFL. Has minimal tools, but is constantly putting OTs on edge due to his speed. Able to counter off that occasionally with inside spin moves and bend on the outside. Slight frame and wouldn't be surprised to see him weigh in under his listed weight of 250. Good 3-4 OLB and played exclusively standing up. Fluid when asked to drop back into coverage. Great prospect.

The Jacksonville Jaguars have selected K’Lavon Chaisson with the No. 20 overall pick in the 2020 NFL Draft.

The Jacksonville Jaguars have made out like bandits in the first round. They landed C.J. Henderson, the draft's number two corner, at ninth overall, and now land the draft's number two edge rusher K’Lavon Chaisson at 20th overall. Chaisson is an explosive speed rusher with good bend and burst who should slide into the starting lineup when Yannick Ngakoue is traded. Chaisson projects as a future DE2 in IDP leagues.