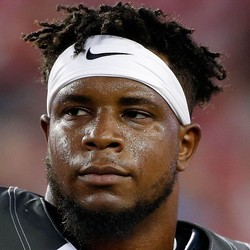 49ers coach Kyle Shannahan says Kwon Alexander (injured reserve, pectoral) has an "outside chance" to return in the post-season.

Shannahan added that this is a "long shot", however. San Francisco's defense hasn't been as dominant the past couple of weeks as they had been earlier this season. Alexander's return would give them a boost but it seems unlikely to happen this season.

Deposit $10 at a DFS partner site you have NOT played at and get a FREE 6 Month HOF Subscription!
Claim Offer
Most Accurate Experts
for Kwon Alexander
Consensus Rankings
View all Flex Rankings