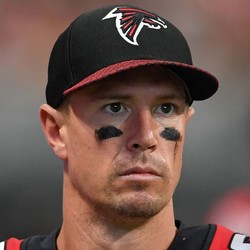 Falcons QB Matt Ryan completed 30-of-51 passes for 313 yards and one touchdown in Sunday's Week 17 win over Tampa Bay.

Ryan finishes the year throwing for over 300 yards passing in five of his last seven games. Remember, he opened the year tossing 300 yards in six straight games before injuries derailed his tremendous run. While Ryan did throw his most picks (14) since 2015 (16), he was still a solid play in fantasy more timers than not.

Deposit $10 at a DFS partner site you have NOT played at and get a FREE 6 Month HOF Subscription!
Claim Offer
Who Should I Draft?
Most Accurate Experts
for Matt Ryan
Consensus Rankings
View All Rankings
Do Not Sell
Are you looking to contact Customer Support about a subscription or account related question?
Yes
No, I'm a California resident looking for the California Consumer Privacy Act form