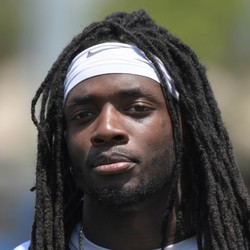 The Chargers aren't playing for much, but Gordon has a great matchup making him a fringe RB1.

Melvin Gordon agrees to two-year, $16M deal with the Broncos

Former Chargers RB Melvin Gordon has agreed to a two-year, $16M deal with the Denver Broncos. $13.5M is guaranteed.

Gordon stays in the AFC West and heads to a division rival. He’ll look to create a thunder and lightning backfield tandem with RB Phillip Lindsay. It looks like RB Royce Freeman could potentially be the odd man out in the Denver backfield. There’s no denying that Gordon has all the talent in the world, but he underwhelmed in 2019 with the Chargers in an injury-riddled year. He only rushed for 612 yards on 3.8 yards per carry. He still managed to find the end zone nine times, salvaging his “down-year.” Gordon will look to bounce back in 2020 with the Broncos, and both he and Lindsay should be considered RB2s for fantasy purposes.

Deposit $10 at a DFS partner site you have NOT played at and get a FREE 6 Month HOF Subscription!
Claim Offer
Who Should I Start?
Most Accurate Experts
for Melvin Gordon
Consensus Rankings
View All Rankings