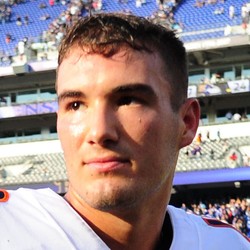 This Vikings defense is not what it used to be, and they will likely be resting some of their starters on top of it. It's a great opportunity for Trubisky to end the season on a high note, and he is a QB2 this week with upside.

Mitch Trubisky to be in 'open competition' for starting gig

After being drafted second overall in 2017, Trubisky took the starting job from Mike Glennon prior to Week 5 and has never had that role threatened. This offseason, however, has been a very different story as the Bears aggressively shopped the free agent market, eventually settling for multi-year deal with Nick Foles. This is Trubisky's last guaranteed season on his rookie deal before the Bears are forced to make a decision regarding his fifth-year option estimated to be around $24M. Pace's comments make it appear as though Trubisky and the newly acquired Foles will battle it out for the starting job in Chicago. Over the last few season, the Bears' staff has consistently lauded Trubisky's performance in camp, although it hasn't translated to much in-game success. While Foles looked primed to take the reins immediately as the starter, this situation will require some attention over the coming months.

Deposit $10 at a DFS partner site you have NOT played at and get a FREE 6 Month HOF Subscription!
Claim Offer
Who Should I Start?
Most Accurate Experts
for Mitch Trubisky
Consensus Rankings
View All Rankings