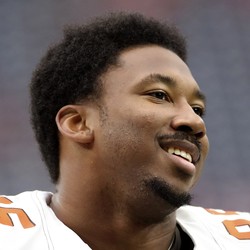 Myles Garrett: Cleveland wants to give the all-pro a long-term extension

Cleveland GM Andrew Berry told Ian Rapoport that the team hopes to sign DE Myles Garrett to a long-term contract extension in the near future.

"We do see Myles as a long-term member and pillar in our organization," Berry said last week on Baltimore's 105.7 The Fan. The only blemish on Garrett’s resume is the strike to Mason Rudolph during the 2019 season which landed him a suspension. He’s one of the league’s best pass-rushers and will demand one of the highest contracts ever for a non-quarterback. Rapoport stated that he could be worth a potential $25M per year. In his three-year career with the Browns, Garrett has a total of 104 tackles, 30.5 sacks, and six forced fumbles.