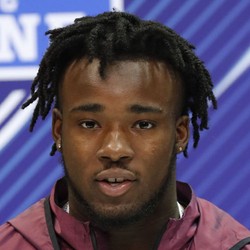 We heard the Bucs say all offseason that Jones was their guy. We didn't even hear about them meeting with any of the free agent running backs. Then we heard the name Keshawn Vaughn in the third round, creating a problem for Jones. When teams select a running back on Day 2, it's typically to play them right out of the gate, even if it's not a clear-cut loss of the job for Jones. No matter which way you slice it, he has some new and improved competition.

Buccaneers’ General Manager Jason Licht said “We have a of faith in Ronald Jones. We have more faith in him than we ever have.”

Jones received a vote of confidence from the Buccaneers’ GM Jason Licht on Thursday, stating that he has more faith in the 22-year-old running back than ever. It has been reported that the team is looking to add a pass catching back to compliment Jones. With Peyton Barber signing with the Redskins, Jones has become the favorite to win the starting running back for Tampa Bay. Rojo logged 172 carries for 724 yards and six touchdowns across 16 games in 2019. He is currently 32nd amongst all running backs in the expert consensus rankings.

(2020)
View Full Schedule
Who Should I Draft?
Most Accurate Experts
for Ronald Jones II
Do Not Sell
Are you looking to contact Customer Support about a subscription or account related question?
Yes
No, I'm a California resident looking for the California Consumer Privacy Act form