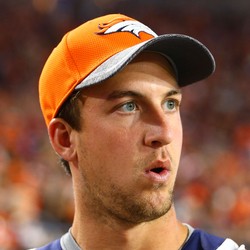 Trevor Siemian out for the season

Trevor Siemian has been ruled out for the season due to his ankle injury suffered Week 2 against the Browns.

Siemian suffered the ugly injury Monday night against Cleveland on a hit from Myles Garrett in which his ankle was bent back in an awkward fashion. He was immediately ruled out, so it's no surprise to see he's sidelined for an extended period. With Sam Darnold continuing to deal with mono, Luke Falk is likely to be the Jets' starting quarterback for the next few weeks. You were already downgrading their wide receivers in Darnold's absence, but the team should continue to lean heavily on running back Le'Veon Bell as was on display Monday night.