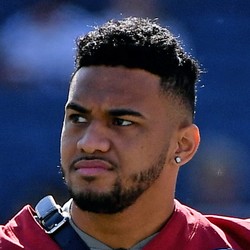 Tua isn't exactly a guarantee to start week one of the 2020 regular season, so we may have to wait a while to see him hit the field. But when he does, he's going to absolutely make an impact for fantasy football. He's an incredibly intelligent QB and is going to help elevate all of the weapons around him. If you're in a need of a QB year one, Tua probably isn't the answer for you, but he's going to be a star once he finds the field.

According to Tua Tagovailoa’s physical therapist Kevin Wilk, Tagovailoa is “doing miraculously well” in his offseason recovery from his hip injury.

Tagovailoa plans to move down to South Florida on Saturday as restrictions ease up and allow for players to begin practicing in their team’s facilities. Wilk praised Tagovailoa’s ability to regain strength during the rehabilitation process that has been ongoing in Birmingham, Alabama during the offseason, stating, “the miraculous part is that he healed so well. The second part is, he’s been so well at getting his strength back, which usually takes a long time after something like this.” And when he’s not working out physically, Tagovailoa is putting in the work mentally to learn the intricacies of an NFL offense. “He’s laser focused. One of the most focused I’ve ever seen anybody, to be honest,” Wilk said. Even though all signs are positive regarding his rehab, Tagovailoa still has a long way to go in order to be ready for the grind of an NFL training camp and season. “He’s in shape now, but he’s not in South Florida football shape,” Wilk said. While Tagovailoa may not be ready to start Week 1 for the Dolphins, he’s likely to take over as the starter for Ryan Fitzpatrick at some point this season as he becomes more comfortable with the offense. Give Tua a long look in the early to middle rounds of dynasty leagues and draft him in the later rounds of redraft leagues this year with the hope that he sees the field sooner rather than later.