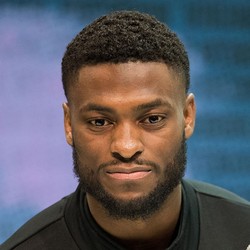 I'd almost go as far as to call him slow, which is odd for a receiver who's 195 pounds, but he lacks any sort of burst off the line of scrimmage. He has decent long speed once he's in motion down the field. Not someone who'll break many tackles, plays up and down. Does have very long arms. Needs to play with a lot more urgency than he does, as you can tell he turns on the effort level when the ball is in his hands. Has quick feet, uses them to juke and create separation. Looked much better in the LSU game than the Virginia one. He needs to come back to the ball in order to help his quarterback out. Waits for the ball to come to him rather than attack it. Good hands when the ball gets there, though.

After undergoing medical testing at the NFL Combine, it was discovered that Van Jefferson has a Jones fracture in his foot. He will undergo surgery next week and will be sidelined 6-8 weeks.

Van Jefferson is an intriguing name towards the later rounds of Dynasty rookie drafts. A clean route-runner with great release off the line of scrimmage, Jefferson will be a target for many NFL teams. However, the Combine was a place to get a true sense of his athleticism, which some people have questioned. Now, we'll have to wait for a pro day...or maybe not at all.