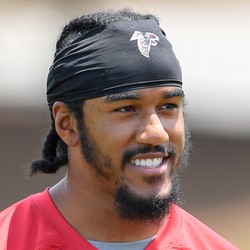 In the past three games the veteran defensive end has been red hot. In that time, he has put up 11 total tackles, three tackles for a loss, and four sacks. He can reach double digits on the season if he can put up a pair against Tampa Bay in the finale. That may be easier said than done as the Falcons' defense failed to register a single sack in the first meeting between the teams.

Impending free-agent edge rusher Vic Beasley Jr. has agreed to a one-year deal with the Tennessee Titans worth $9.5M guaranteed with a max of $12 million, according to reports from Dianna Russini and Ian Rapoport.

The Falcons announced they would not be re-signing their former first-round pick, and Beasley has apparently opted for a one-year deal in order to build on his value ahead of next offseason.