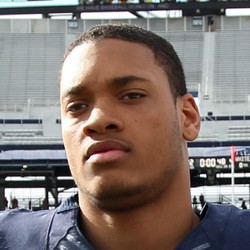 He's built like a thicker 4-3 DE. Has decent mobility for a big guy. Doesn't have much burst, though. He can easily be directed on where he's pushed because he's overly aggressive. See him run right by the ball, as well as be redirected inside to a stretch run. Does a good job keeping his pads low. He won't get out-muscled, but rather shifted to the direction the blocker wants. He's built well in his bottom-end. Stance looks good. Could be a role player, just don't think I see a superstar.