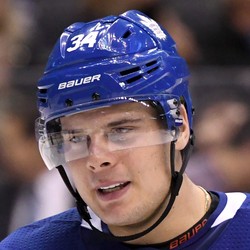 Auston Matthews scored a goal and had an assist during a 5-2 road loss to San Jose. He also had five shots on goal in 21:46 minutes of ice time.

The goal was number 46 for Matthews who also has 33 assists in 67 games played this season. He has scored a goal in each of his last three games.

Auston Matthews scored twice in the Maple Leafs' 5-3 loss to the Rangers on Wednesday. He was a minus three with two goals, one PPG and four SOG in 20:33 of ice-time. Matthews now has 39 goals and 25 assists thru 54 games.

Mathews is clearly one of the games best players and continues to show it night in and night out. He is one goal off of tying a career high 40 goals and is on pace to get over 50 this season.

Auston Matthews got involved in all of Toronto's offense on Sunday night, as he picked up four assists (two on the power-play) in the Leafs 5-4 loss to Chicago. He fired 10 shots on goal and chipped in two blocks and two penalty minutes.

While the result may not have been what the Leafs were hoping for, fantasy owners certainly can't complain with the production Matthews provided against the Blackhawks. This was the first game this season that he fired double-digit shots on goal, but he was even more effective as a set-up man in this one, which was nice to see for a change. Matthews is absolutely dialled in with nine points (two goals, seven assists) in his last four games. He's up to 13 goals and 25 points in 19 games overall.

Auston Matthews broke the tie in the third period with his 12th goal of the season and added an assist in the Maple Leafs' 3-1 win over Los Angeles on Tuesday. The superstar added two shots and a +2 rating in his 18:41 of ice-time.

It was a quiet game statistically throughout the first two periods of the night, but Matthews turned it on in the third period when it mattered most. The centreman managed to corral a loose puck on the doorstep and fire it home to put the Leafs in front, then he set up William Nylander for another goal thirty seconds later that iced the game for Toronto. This was Matthews' sixth multi-point game of the season and he's now up to 18 points (12 goals, six assists) through 16 games. Keep rolling him out there and he'll keep producing.

Auston Matthews potted his ninth goal of the season in Toronto's 4-1 defeat of the Sharks on Friday. He had at least twice as many shots on goal as any other player in the game (6).

Matthews continued to be threat at even-strength, as this goal was his seventh at five-on-five this season. This is key, as the Leafs power-play has hit a bit of a rut of late, converting on just one of their last twelve opportunities. The Leafs and Matthews have a matchup against the Canadiens on Saturday that could provide a spark for the team. Matthews sniped two goals against Montreal in their previous meeting this season, so continue to deploy him with confidence.

Brendan Ballantyne37 weeks ago
Do Not Sell
Are you looking to contact Customer Support about a subscription or account related question?
Yes
No, I'm a California resident looking for the California Consumer Privacy Act form