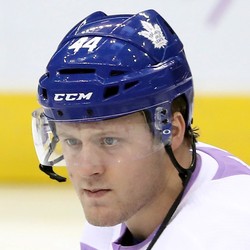 Morgan Rielly potted a pair of goals, including the game-winner, in Toronto's 4-3 overtime win over the Bruins on Saturday. He added five shots and four blocks.

The goals were Rielly's first two of the season and they couldn't have come at a better time for the Leafs. On his overtime goal, Rielly was the beneficiary of a lucky bounce as Mitch Marner fired a shot that hit him right in the chest and found its way into the back of the net. But they all count, and I don't think fantasy owners are complaining. While that goal may have been a bit fluky, Rielly's production so far this season is far from that. He's second in the NHL among defensemen with 11 points (nine goals, two assists) in nine games and doesn't look like he's slowing down.

Brendan Ballantyne14 weeks ago
Morgan Rielly dominates against the Wild

Morgan Rielly broke out in a big way on Tuesday night, coming through with four second-period assists that led the Maple Leafs to a 4-2 win over Minnesota.

Rielly was all over the ice in this one, picking up two of his assists on the power-play, firing six shots on goal and serving two penalty minutes. He hasn't scored a goal yet this season, but he now has nine assists through seven games. Elite outbursts like this are why you should confidently deploy Rielly in every game he suits up.

Morgan Rielly was snapping it around on Friday. He led the way with a team-high three assists, two of which came on the power-play. He also fired two shots on goal and added two hits, two blocks and two penalty minutes in 23:12 of ice time.

Rielly now has four assists through the first two games of this season. He blew his career-high out of the water last season when he posted 72 points in a full 82 games and based on how things have gone so far, there's no reason to believe Rielly isn't headed that direction once again. He is in a prime fantasy situation and should be very highly valued in all formats.

Morgan Rielly got the scoring started Sunday afternoon with a goal 9:42 into the first period to put the Maple Leafs up 1-0.

Rielly has been impressive this series, producing five points in six games, as well as maintaining a plus-two rating during this stretch as well.

Like all the Maple Leafs, Rielly has feasted on the club's 13-goal tally in their last two games having earned 5 points himself in that span. His 29 assists this season rank him 13th in the NHL.