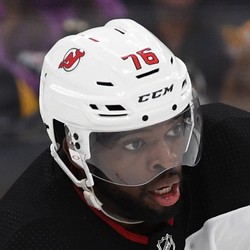 P.K. Subban scored a goal 51 seconds into the second period to end his 23-game scoring drought. The New Jersey Devils went on to beat the Chicago Blackhawks 7-1.

P.K. Subban has three goals and four assists in 36 games played this year for the New Jersey Devils.

P.K. Subban failed to record a point against Tampa Bay on Wednesday. He had 2 shots on goal.

P.K. Subban's woes continue. He has just four points on the season as New Jersey continues to struggle.

P.K. Subban tallied an assist against Florida on Monday.

Subban has just 2 points this season. Until the Devils end their slump, Subban is not a reliable starter.

P.K. Subban recorded an assist against the Jets on Friday.

Subban played well in the Devils' loss to Winnipeg. As one of the NHL's elite defensemen, Subban will continue to get on the scoreboard as he acclimates to his new team.

the rumors have been swirling for weeks now and the Predators finally pulled the trigger on the deal. Most believe that the move is to mostly to clear up cap space to sign coveted free agent Matt Duchene, whom many believe the Predators are favorites to land. Losing PK is a big blow to the defense, but also with the young stud Defensemen Dante Fabbro joining the roster, it made a defensemen expendable and PK was the most valuable chip.