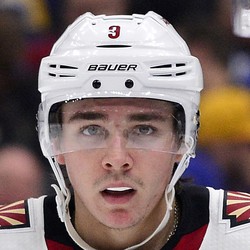 Clayton Keller had a point on Tuesday

Clayton Keller recorded an assist as the Coyotes bested the Sharks 3-2.

Keller has been playing well lately, he has at least a point in seven of his last nine games. Still just 21 years-old, Keller is great dynasty player to own. However, with 24 points in 36 games he has played his way on the redraft radar as well.