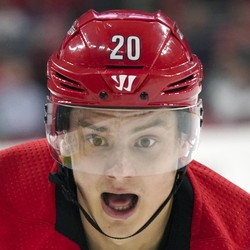 Sebastian Aho scored a third-period power play goal during the Hurricanes 5-2 loss to the New York Rangers. The goal came on his only shot on goal and he finished with a minus-two rating in 21:32 minutes of ice time.

The goal was his 35th of the season and he also has 23 assists with a plus-11 rating in 60 games played. Aho has been hot lately with five goals and two assists in his last five games.