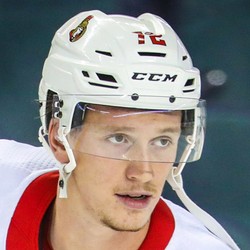 Thomas Chabot records an assist in loss to Vancouver

Thomas Chabot grabbed an assist and fired two shots on goal in Ottawa's 5-2 loss to the Canucks on Tuesday. The 22-year-old skated a game-high 24:51 in the contest.

The Senators may have lost five straight games, but Chabot's fantasy production continues to chug along at a solid rate. The third-year defenceman has managed to record seven points in his last nine games, bringing his season total up to 17 points (three goals, 14 assists) in 28 contests. Keep rolling him out there, because he's proven by now that he'll maintain consistent value no matter how poorly his team may be playing overall.