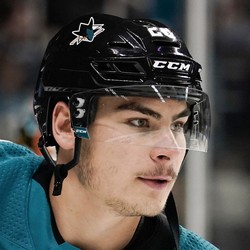 Timo Meier scored a third-period goal at 6:47 that proved to be the difference in the Sharks 3-2 win versus Winnipeg. He ended the game with three shots on goal in 15:49 minutes of ice time.

Meier has a four-game point streak going that includes three goals and three assists with 13 shots in that span. The goal was his 19th of the season to go along with 19 assists in 57 games played.