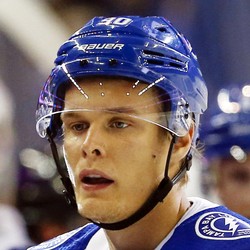 Vladislav Namestnikov records an assist in loss to Islanders

Vladislav Namestnikov skated 19:06 in Ottawa's 4-1 loss to the New York Islanders on Tuesday. He contributed an assist of the shorthanded variety, and threw two shots on goal in the contest.

It would appear that Namestnikov has found somewhat of a home in Ottawa. After his ice-time had began to dip after reaching a career peak of 17:05 per game in 2017-18, Namestnikov is averaging 18:52 with his new club. He has totalled 10 points (five goals, five assists) in 14 games this season, but all of his points have came in the 12 games since his trade to the Senators. If you're in desperate need of points, Namestnikov could be worth a cheap flier given the ice-time he's receiving. But don't get your hopes too high, this is a guy that's produced just 0.45 points per game in his career and Ottawa isn't exactly a fantasy paradise.