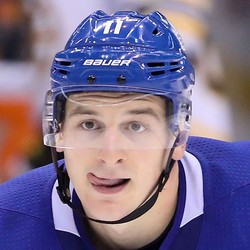 Zach Hyman scores his first goal of the season

Zach Hyman scored a power-play goal - his first goal of the season - in the Maple Leafs' 4-2 loss to the Golden Knights on Tuesday. He also fired six shots on goal and had one hit.

In what was his fourth game of the season since his return from injury, Hyman finally put the puck in the back of the net. He has been thrown right into the mix, averaging 18:04 of ice-time per-game and is skating on the second power-play unit. While the Leafs are struggling mightily right now, Hyman is skating on a line with John Tavares and has posted back-to-back 40 point seasons. He could be worth a speculative add in deeper leagues because the potential for value is there if things get back on track in Toronto.