Most football fans know how much the game has changed over the past decade, as an increased emphasis on passing has replaced a ground-and-pound philosophy that ruled the NFL for the better part of its 100-year history.

The devaluing of the running back position through analytics has displayed prominently in the NFL draft, where only 14 running backs were selected in the first round from 2010-2019, the fewest in a decade since the 1940s (when there were at most 11 NFL teams drafting). The anecdotal evidence against drafting the position in the first round is strong as well, as only six of the last 20 Super Bowl champions started a first-round running back in the big game. 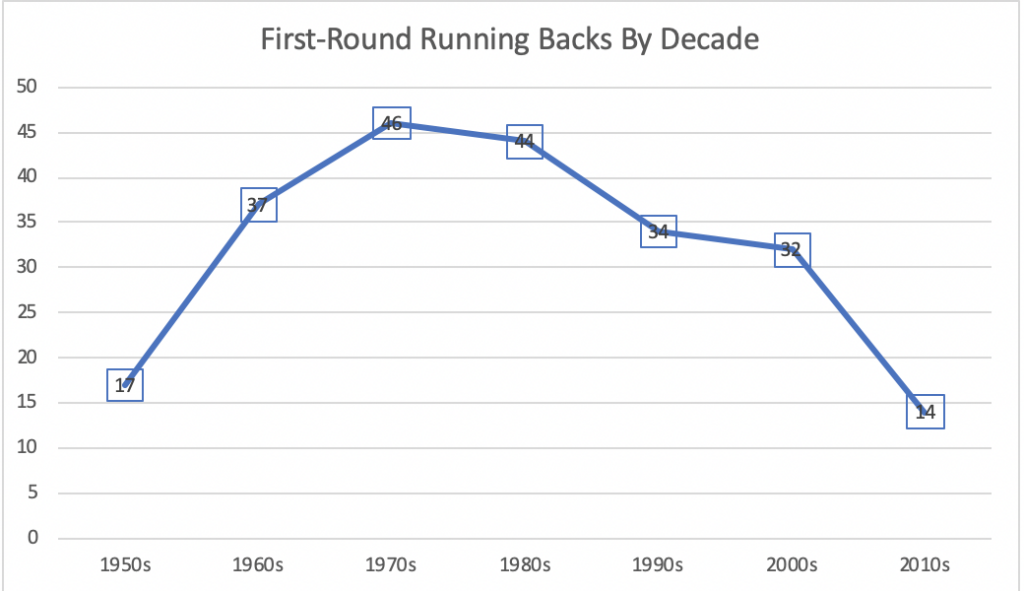 In recent seasons, first-rounders Todd Gurley, Ezekiel Elliott, Saquon Barkley and Christian McCaffrey have found early success at the NFL level, but as have second-day and later draft picks such as Alvin Kamara, Aaron Jones, Le’Veon Bell and Nick Chubb.

As evidenced, significant value can and likely will be found among running back sleepers in the 2020 NFL draft. Below we’ve provided a list of five players whose profiles and statistics project well at the next level.

Note: Success is dependent on opportunity, meaning some of these rookies may not break out until the 2021 campaign or beyond (see Derrick Henry from 2016-2017).

Clyde Edwards-Helaire (LSU)
2019: 1,414 rush yards, 6.6 YPC, 16 rush TD; 55 receptions, 453 receiving yards, receiving TD
Draft Projection: Second or third round
Background: Edwards-Helaire paced the Tigers backfield in carries with 215 last season but he finished his collegiate career with a relatively small cumulative workload, which should bode well for his NFL draft stock. Although scouts have knocked his pass-protecting and second-level speed, his initial burst, physicality and route-running ability should keep him active in goal-line and passing situations. While Edwards-Helaire may only see situational opportunity during his rookie season, he has the potential to grow into a true three-down workhorse provided he can adjust to the strength and speed of the NFL game.

Zack Moss (Utah)
2019: 1,416 rush yards, 6.0 YPC, 15 rush TD; 28 receptions, 388 receiving yards, two receiving TD
Draft Projection: Second or third round
Background: Moss’s career stat line at Utah – 712 attempts, 4067 rush yards, 38 touchdowns – scares as much as it inspires confidence in what he brings to the NFL. On one hand, scouts love to see a strong body of work built over a significant sample size. On the other, NFL teams have been wary about drafting running backs with heavy collegiate workloads given the ephemeral average shelf life at the position. From a skills perspective, Moss initiates tons of contact with a bruising running style and maintains excellent balance through tackles. While he won’t test as one the faster running backs at the combine and doesn’t profile as a great receiving back in the NFL, Moss’s strength and vision should translate to the next level, especially in short-yardage situations. His ceiling projects somewhere between Marshawn Lynch and an early-career Alfred Morris.

A.J. Dillon (Boston College)
2019: 1,685 rush yards, 5.3 YPC, 14 rush TD; 13 receptions, 195 receiving yards, receiving TD
Draft Projection: Fourth or fifth round
Background: Dillon is a downhill runner with ideal size (listed 6’0″, 250 pounds) and strength to carry defenders in short-yardage situations. He played for an offense at Boston College that leaned heavily on him over the past three seasons, finishing his collegiate career with 845 carries and 38 rushing touchdowns. Dillon’s physical profile mirrors that of fellow power back LeGarrette Blount, who secured significant goal-line carries for three Super Bowl-winning teams despite going undrafted out of Oregon in 2010. The emergence of Derrick Henry over the past two seasons could open opportunities for a player of Dillon’s build, as copycat offensive coordinators will be searching for ways to control the football and keep opposing offenses off the field in 2020.

Darrynton Evans (Appalachian State)
2019: 1,480 rush yards, 5.8 YPC, 18 rush TD; 21 receptions, 198 receiving yards, five receiving TD
Draft Projection: Sixth or seventh round
Background: Evans spent the past two years as Appalachian State’s starting running back and has returned kicks for the team dating back to his freshman year in 2016 (he returned a kickoff for a touchdown in each of his three collegiate seasons). While scouts will value his versatility, they may want the 5’11” satellite back to bulk up before he plays in the NFL (he’s currently listed at 200 pounds), provided he doesn’t sacrifice his straight-line speed, which grades out as his best tool. Evans reportedly ran a 4.37 40-yard dash at spring testing before his junior season, making him one of the fastest draft-eligible running backs in this year’s class (provided he comes close to that 40 time at the NFL Scouting Combine). Speed kills, as the saying goes, and it wouldn’t be surprising to see Evans find a gadget role in a creative offensive system in 2020. His size/speed profile resembles 49ers running back Matt Breida, who went undrafted out of Georgia Southern in 2017.

Benny LeMay (UNC-Charlotte)
2019: 1,072 rush yards, 5.6 YPC, nine rush TD; 19 receptions, 242 receiving yards, four receiving TD
Draft Projection: Sixth or seventh round
Background: LeMay is another one of those small-school guys whose collegiate production is perhaps unfairly attributed to his playing against lesser competition. On the biggest stage against Clemson this past season, LeMay held his own despite facing loaded boxes and mismatches in the trenches, finishing the game with 81 rush yards on 18 carries. His tape shows a patient runner (he’s got a little Le’Veon Bell to his game) with a solid first step and strong anticipation in space who isn’t afraid to step in front of a blind-side bull-rush. LeMay could shoot up draft boards depending on his NFL Scouting Combine performance later this month.

When Do Rankings & ADP Really Start to Matter? (Fantasy Football)

Free Agent and Draft Needs For All 32 NFL Teams

Players to Monitor at the 2020 NFL Combine